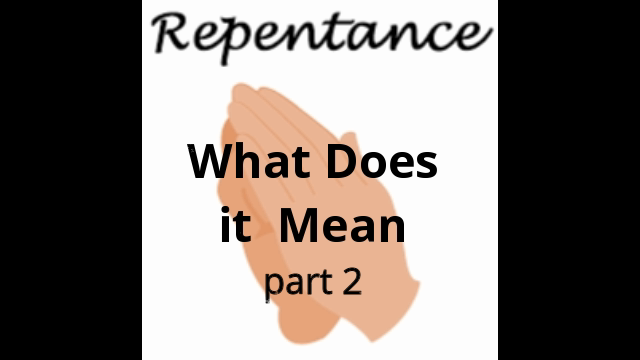 WHAT THE BIBLE TEACHES
ABOUT REPENTANCE?
When Paul was speaking from Mars Hill to the Athenians and reasoning
with them concerning the living God, he told them that in times
past God had winked at such ignorance

So Paul, standing before the council, addressed them as follows:
“Men of Athens, I notice that you are very religious in every way,
or as I was walking along I saw your many shrines. And one of your
altars had this inscription on it: ‘To an Unknown God.’ This God,
whom you worship without knowing, is the one I’m telling you about.

He is the God who made the world and everything in it. Since he is
Lord of heaven and earth, he doesn’t live in man-made temples, and
human hands can’t serve his needs—for he has no needs.

He himself gives life and breath to everything, and he satisfies every need.

From one man he created all the nations throughout the whole earth.
He decided beforehand when they should rise and fall, and he
determined their boundaries.

His purpose was for the nations to seek after God and perhaps
feel their way toward him and find him, though he is not far
from any one of us.

For in him we live and move and exist. As some of your own
poets have said, ‘We are his offspring.’

And since this is true, we shouldn’t think of God as an idol
designed by craftsmen from gold or silver or stone.

God overlooked people’s ignorance about these things in earlier times,

but now he commands everyone everywhere to repent of their sins
and turn to him.

In Acts Chapter 8, the story is told of a man, (Simon) who
obeyed the gospel, he was baptized, but later for the love of gold
and popularity, he wanted to buy the gift of the Holy Spirit.

At this time it seems apparent that Simon's heart was not sincere and pure.

God, knowing the hearts of all men and certainly knowing the heart
of Simon on this occasion, directed Peter by the
Holy Spirit to tell Simon to first repent, not pray first but repent
first then then change his heart and attitude

"Repent of this depravity and wickedness of yours and pray to the
Lord that, if possible, this contriving thought and purpose of your
heart may be removed and disregarded and forgiven you". (Acts 8: 22)

Simon was commanded to exercise proper sorrow for this act and
to abandon his plan or principle or action.
*****************
This lets us know today that all unrighteous men are exhorted to repent.

This is their first work. They are not told to wait, to read,
to pray, to receive an experience, to relate a revelation in the
expectation that repentance
will be given to them.

Such unrighteous beings are to
repent, to change their affection,
and to turn to the living God.

Then prayer will be acceptable. Then, and only when man repents,
will God hear and answer.

When man comes loving his sins and resolving to continue
practicing them, God will not hear him.

"We know that God doesn't listen to sinners, but he is ready
to hear those who worship him and do his will"
(John 9: 31

For the one who has never been baptized into Christ,

Turning to the living God is the initial step of his response
to the love of God which he has heard, and believed, by
hearing the life of Jesus Christ, the Savior of man.

For those who have, like Simon, been directed by the love of power
and the love of the world, it is that initial act that leads one to be
restored to his former relationship with the Father.

When man sins, he must either repent or perish. It is just that simple.
It is a either or proposition.

Man must face judgement and that is the reason God has
commanded all men everywhere to repent.

God has appointed a day in which He will judge the world.

Peter in writing his second epistle stated
"that God is not willing that any should perish, but that all
should come to repentance". (2 Peter 3:9)

Repentance is a change in our affection,
a turning to God.

Leaving Satan and our selfish independence and serving the
Savior causes one to avoid destruction.

Jesus said "I tell you, unless you repent, you shall all likewise perish"
(Luke 13: 3)

Repentance is a direct challenge to man's will power.

It demands that he humble himself before God,
and give up everything that is contrary to his will.

The holy demands of repentance have kept many of the
highminded, pridefull, and arrogant out of the kingdom of God.

Repentance is a duty imposed upon all mankind.

It is a plain command of God, and no man can refuse to repent
without bearing the responsibility that must come upon him.

When Jesus gave the world-wide commission, He said,

"That repentance and remission of sins should be preached in
his name among all nations" (Luke 24:47)

Can anyone read these scriptures and conclude that
The Apostle Paul said that,
he can be saved without repentance?
*************

Let us clear away some of the misunderstanding about repentance
by learning what it is NOT.

In the first place, repentance is not simply being afraid.
Paul convicted Felix of his sins,
"Felix trembled with fear but he did
not repent and turn" (Acts 24:25)

There are many people today who are afraid when they think
of their sinfulness, but they, like Felix, refuse to repent,
and die without hope.

In the second place, repentance is not simply being sorry that one has sinned.

The murderers of Jesus sorrowed on the day of Pentecost at Peter's
preaching. They were pierced in their hearts by godly sorrow.

Their sorrow was godly because it was produced by their faith
in gospel preaching; but it was not repentance.

In the third place, repentance is not simply and solely a reformation
of life, A man may quit sin and yet not repent toward God.

He may quit because that particular sin renders him unpopular
in his business, school, or among his associates.

Thus, he may reform his life for selfish reasons,
but such reformation is not repentance.

Simply stated, repentance is a change of mind,
or will, based upon godly sorrow.

"For godly sorrow works repentance to salvation not to be
repented of: but the sorrow of the world works death".
(2 Cor 7:10)

Repentance should result in a manner of life directed by Christ.

"I preached first to those in Damascus, then in Jerusalem and
throughout all Judea, and also to the Gentiles, that all must repent
of their sins and turn to God and prove they have changed
by the good things they do". (Acts 26:20)
*****************

Our Lord gave us an example of repentance
which we can all understand, He said,

"A certain man had two sons;
and he came to the first, and said, Son, go work today in my vineyard,
He answered and said, I will not: but afterward he repented, and went"
(Matthew 21-28-29)

This boy began to reflect on what he had done, and he
realized that he had disobeyed his father,

He became conscious of the fact that he sinned against his father,
who was responsible for his very existence, and
when he came to himself, he acknowledged that wrong,
and then corrected it.

He changed HIS MIND (repented) and did that
which he said he would not do.
Jesus said that was repentance.
****************
Christ said to the Pharisees,
"The men of Nineveh shall rise in judgement with this generation,
and shall condemn it; because they repented at the preaching of Jonas;
and, behold, a greater than Jonas is here" (Matthew 12:41)

Jesus here says that the men of Nineveh repented at the preaching
of Jonas. The Bible says:
"God saw their works, that they turned from their evil way" (Jonah 3:10).

The preaching of the prophet of God changed the mind of the Ninevites,

and this change led them to turn from their evil way.


The first motive is fear. The Bible writers say,

"We must all appear before the judgement seat of Christ;
that everyone may receive the things done in his body,
according to that  he has done,

whether it be good or bad. Knowing therefore the terror
of the Lord, we persuade men"
(II Corinthians 5:10-11)

The second motive God uses to bring about repentance is love.

The Bible says,
"Don’t you see how wonderfully kind, tolerant,
and patient God is with you?

Does this mean nothing to you?

As we study the life of our Lord, and see the beauty of
holiness manifested through His earthly pilgrimage,

Then follow Him to Calvary and watch Him suffer there,
dying for our sins, making it possible for poor sinners to be saved,
and to become children of God, we ask

The answer comes back in the Bible,
"The goodness of God leads you to repentance."

Then ask Him to give you his loving Grace
which will enable you to turn from your sin
​(repent) and live for Him. ​

and remember
You can Improve and change your life by
Reading and Studying the Bible Daily
Until next time: