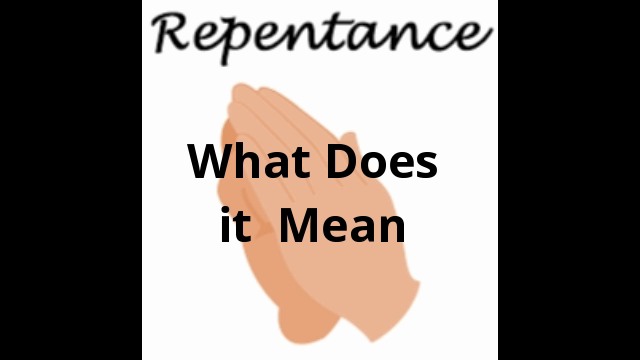 Repentance is the act of changing one's mind.
Webster's dictionary defines the word as "to feel sorry for what
one has done or has not done".

Webster also gives the definition as to
feel such regret and dissatisfaction over some past action
or intention as to change
one's mind about it or to change one's way.

"When Jesus heard it, he saith unto them,
They that are whole have no need of the physician, but they
that are sick: I came not to call the righteous,
but sinners to repentance". (Mark 2:16-18)

It involves turning to the living God from a
god of self.

Repentance is the right attitude toward self.
The story of the Prodigal Son gives a good example
of this in Luke 15:11-32
"And when he came to himself, he said, How many hired servants
of my father have bread enough and to spare, and I perish with hunger!
I will arise and go to my father, and will say unto him, Father, I
have sinned against heaven, and before thee,

And am no more worthy to be called thy son: make me as one
of thy hired servants. s yet a great way off, his father saw him,
and had compassion, and ran, and fell on his neck, and kissed him.

And the son said unto him, Father, I have sinned against heaven,
and in thy sight, and am no more worthy to be called thy son.

But the father said to his servants, Bring forth the best robe,
and put it on him; and put a ring on his hand, and shoes on his feet:

For the kind of sorrow God wants us to experience leads
us away from sin and results in salvation.

There's no regret for that kind of sorrow.
But worldly sorrow, which lacks
repentance, results in spiritual death.
2 Cor 7:10 NLT
***********************************
Repentance is not gloomy despair.
When Judas sold his Master for thirty pieces of silver, he was filled
with gloom and despair, so much that he committed suicide,
but he did not repent.

"When Judas, who had betrayed him, realized that Jesus
had been condemned to die, he was filled with remorse.

So he took the thirty pieces of
silver back to the leading priests and the elders.

Repentance is not concealing sin.
David in the Bible tried to conceal his sin, but God exposed it.

We even know about David's sin today.
Concealing sin is like trying to cover up spilled seed in
order to hide it.
The seed comes up and is exposed.

"Whatever you have said in the dark will be heard in the light, and
what you have whispered behind closed doors will be shouted
from the housetops
for all to hear" Luke 12:3 NLT
****************
Repentance must be followed by works proving that change.
In Acts 19:19, the repentance was evidenced in the bringing of books
valued at fifty thousand pieces of silver and burning them before
all men. This let all men know of the change.

Paul wrote the first letter to the Corinthians and included
a scathing denunciation of their sinful deeds.

However, part of the second letter to them was written commending
them for turning from their vile way of living.

Whatever this young man did, Jesus said he repented.
Jesus called his actions repentance. The young man reflected
over the matter, he came to know that he was wrong, realizing
that he had sinned against his father.

Having arrived at this conclusion, the young man faced
about in an opposite direction and did according to his father's request.
****************
All men need to repent. All men sin and as a result, all men
need to turn from sin and turn to righteousness.
******************
Do you have anything you need to repent of?
Think about it. Pray about it, and if you do.
DO IT NOW!

and remember
You can Improve and change your life by
Reading and Studying the Bible Daily
Until next time: