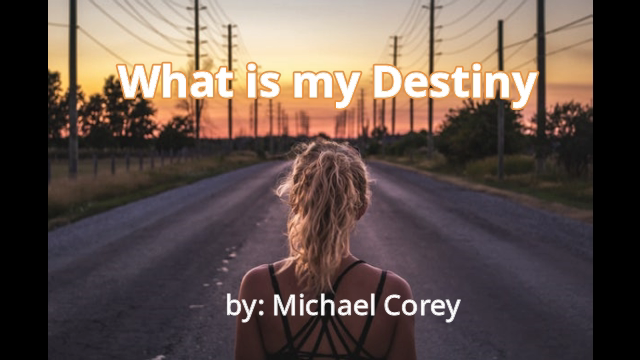 Your Destiny in God

We are living in a time when our standard of living is going up and up. We all enjoy the modern conveniences such as microwave ovens, cell phones, and the internet. What would some of our older generation have thought of such things in their day?

No other generation that has ever lived on the earth has had as many cares of life as this one. With much more things, much more stress. Never has any generation faced the perplexing problems we face today. Despite all the technological advances, misery is still being piled up on top of misery. Look at the situation in Iraq , Israel , and even in the United States . Mankind, as a whole and individually, stands in dire need!

The Word of God teaches us that we can change things. Now the devil may have destined us for pain and sorrow, but we can change our destiny through faith in God and His Word. As the song goes, "I'm trading my sorrows for the joy of the Lord."

We hold the key to our own destiny and future. That is correct. I said we hold the key. God does not hold it. How can I say such a thing? God has already done everything He is going to do for mankind. He has made a way of escape. That path of escape is through the redemptive blood of the Lord Jesus. Through Him we can have faith to change our destiny while on this third rock from the sun.

We have two choices: we can either fold our hands and succumb to complacency, or we can look to the fields that are white to the harvest-to the souls who are lost, dying, and going to a devil's hell-to those that are bound by the chains of sickness and need help.

The word "apprehended" in this context means to obtain, to excel, to have excelled here.

But notice what the Apostle said,"I count not myself to have excelled." Then he went on to say, "But this one thing I do, forgetting those things which are behind . . ." That is an interesting statement. Not only did Paul have for forget failure, he had to forget success too!

As he was writing those words, his mind likely went back to the day he stood outside of Jerusalem holding the coats of the men who were stoning Stephen the first martyr, even to the point of encouraging them.

Someone might say, "I have trouble forgetting my past." Have you stood by and watched someone stoned to death? Paul did, yet he had to forget that. He also had to forget the success he had on Mars Hill in Athens when he went face to face with the Greek philosophers. Paul proclaimed to them the "philosophy" of the Gospel of the Lord Jesus Christ. This even was a tremendous success in the life and ministry of Paul. He was from Tarsus , formerly called Saul. Now here he is standing on this place matching the greatest philosophers word for word about the power of God. Yet, he had to forget this as well.

He also had to forget that he started one of the largest churches in history, the Church at Ephesus . If you study that you will find that the church had between 20,000 to 40,000 members. Pretty good size church, would you not agree?

In all this Paul said, "I count not myself to have done anything (or excelled), but this one thing I do, forgetting those things which are behind. . ." Paul forgot success. Paul forgot failure. He forgot everything that had happened to him in the past, because it was history. It could not do anything for him now even if he wanted it too.

In the book of Mark, we find a man sitting at a gate on the road to Jericho . His destiny had been chosen for hihim through circumstances. He was blind.

Back then, there was no welfare; no vocational training, not even Braille. Circumstances had relegated Bartimaeus to the lowest of the low-to the very pit of humanity-begging.

He sits there on the side of road with his cup waiting for a meager handout from the day's travelers. The dust from the animals and even the feet of people probably settled on his clothes. Sometimes he probably could smell the food folk had in their hands as they passed him by without even giving him a crumb.

Nevertheless, he sits there, waving his cup hoping for a little money to drop so he can survive one more day.

But one day Bartimaeus hears a commotion. There is a stir in the air. There is a large crowd approaching.

Bartimaeus grabs someone and asks, "What is happening?" Someone probably said, "Oh, you old beggar, it just Jesus of Nazereth passing by. Do not get too excited. This crowd will be gone in a few moments, and maybe you will even get a few coins today."

Bartimaeus now has a question in his mind: "What do I do now? Where do I go from here?" He realizes that this is the Man who has been going about doing good and healing all who were sick and oppressed of the devil (Acts 10:38).

Romans 10:17 says, "Faith cometh by hearing, and hearing by the word of God." Faith that changes your destiny comes by hearing God's Word. In the Gospel of John it says that"The word was made flesh and dwelt among us." That Word was Jesus Christ.

When Bartimaeus hears that the Word is passing by, faith rises up within him. He asks himself, "Do I sit hear and let the crowd go by and perhaps collect a few coins? Or, do I turn to the only help man has ever known?"

The men preceding Jesus go over to him and say,"be quiet. Jesus is passing by." It is amazing that those who walk in front of Jesus want everything to be quiet, and those walking with Him are rejoicing, and having a grand ol time!

Mark 10:48 "And many charged him that he should hold his peace: but he cried the more a great deal, Thou son of David, have mercy on me."

Faith in God cannot be quieted! When circumstances come in like a flood, the cry of faith will ring out even louder. It says there that Bartimaeus did not shut up-he got louder!

If that is what Bartimaeus had actually said, he would still be sitting, blind, on the road outside of Jericho !

But because he would not be quiet-the cry of faith cannot be quieted-he shouted even louder: "Jesus, have mercy on me!" And his life was changed

Mark 10:49 -52 "And Jesus stood still, and commanded him to be called. And they called the blind man, saying unto him, be of good comfort, rise; he calleth thee. And he, casting away his garment, rose, and came to Jesus. And Jesus answered and said unto him, what wilt thou that I should do unto thee? The blind man said unto him, Lord, that I might receive my sight. And Jesus said unto him, go thy way; thy faith hath made thee whole. And immediately he received his sight, and followed Jesus in the way."

There He was-Jesus Christ, the Son of God, the King of kings, Lord of lords in the flesh. His very steps ordered by the Holy Ghost-and He came to a complete stop at the voice of faith!

Bartimaeus had faith. He wanted to change his destiny in life.

See it! See Jesus. Does he (the blind man) fall down at Jesus' feet and cry, "Lord, please help me!"

Now that is the way a lot of religious folk think it should be done-that is the way many modern preachers tell you it is supposed to be done. Your Bible says that blind Bartimaeus walked up to Jesus, looked in the direction of that voice and boldly said, "I want to see, Lord."

Jesus reply was, "You have it!"

Immediately, Bartimaeus began to see, and it says he began to praise God and follow the crowd. He no doubt threw away his coin cup, and gave the money had had to some other poor soul. Had he listened to those around him he would not have been changed!

Find out what God wants from you, and do it. Receive what God has for you! It belongs to you. Do not let the devil take it away from you.


​and remember
You can Improve and change your life by
Reading and Studying the Bible Daily
Until next time: